We are structural engineers, specialising in the design, fabrication and installation of artworks.

Alongside colleagues at Expedition Engineering, we designed and assisted with the installation of Jyll Bradley’s latest installation, The Hop at the Hayward Gallery, part of London’s Southbank Centre.

We are structural engineer to Julian Opie‘s studio. Recently we completed the engineering design of these two 12 metre tall figures, Suit and Leggings, on Plaza del Colegio del Patriarco, Valencia. We worked with fabricators Flysteel Metallic Structures, Porto to deliver this project for Fundacion Hortensia Herrero as part of a major exhibition of Julian’s recent work. The exhibition can be seen at Plaza del Colegio del Patriarco and at the La Nau Cultural Centre, Valencia until 19 September.

We are the structural engineer for Jonathan H. Wright‘s Data Tree which recently landed in Lesnes Abbey Wood, East London as part of the Estuary Festival 2021. This project was another opportunity to work with Ashley Light Engineering and Artful Logistics in the installation of this magical artwork. Data Tree is located in a clearing, in woodland forming part of the ancient Lesnes Abbey estate.

We worked with The Line and London Bronze Casting to deliver Reaching Out by Thomas J. Price . This important artwork can be seen at Three Mills Green, Bromley-by-Bow, East London. 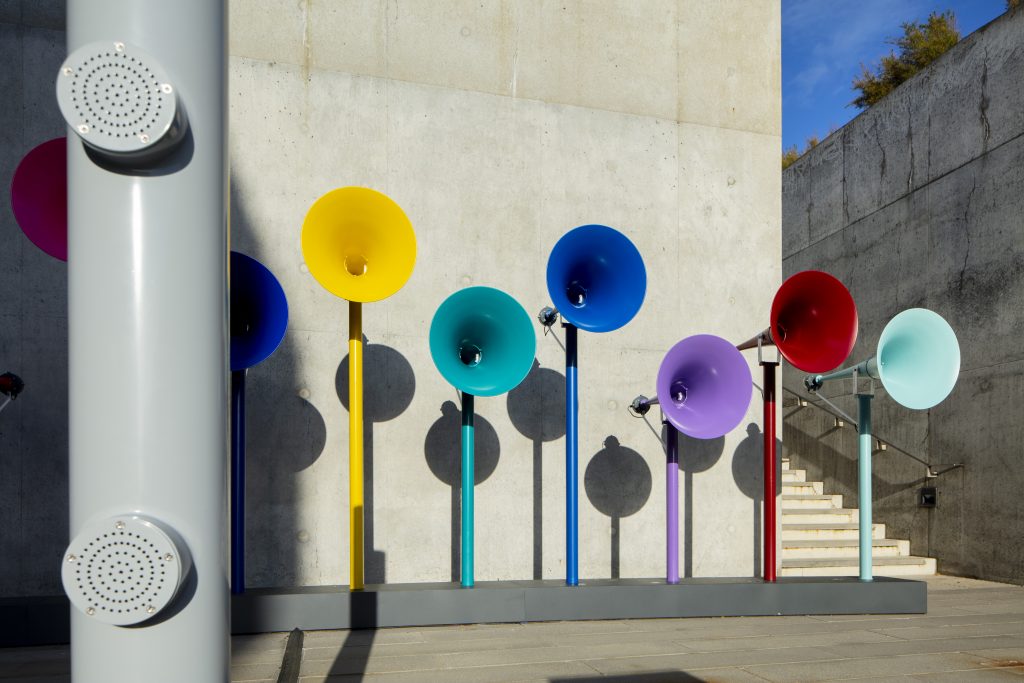 We were the engineer and fabricator of Ash to ash, an artwork by internationally-renowned artists Ackroyd & Harvey. We fabricated the artwork from two recently-felled Ash trees and 10,000, slightly tapered ash staves, or “arrows” hand-made by Tom Mareschall and Adam Jenkins at Now Strike Archery.

Final installation of the artwork, at White Horse Wood Country Park, was carried-out by art freight specialists Mtec in collaboration with the artists.

The artwork was commissioned by Kent Downs AONB Unit as part of The Ash Project – an urgent cultural response to the devastating effects of ash die-back which will see the majority of the UK’s ash trees die-out over the course of the next decade.

We provided structural engineering consultancy services to Turner Contemporary and Moosejaw Woodworks in connection with DOES THE ITERATIVE FIT, an artwork by artists Joanne Tatham & Tom O’Sullivan.

The artwork was originally commissioned by King’s Cross Central as their 2017 Christmas tree on London’s Granary Square.

The art was recently installed at Turner Contemporary in Margate as their 2018 Christmas tree. Where to next year?

In the summer of 2017, we then relocated Dutch Light to Turner Contemporary, Margate where it became an Instagram sensation.

Dutch Light is currently installed on Aldgate Square as part of Sculpture in the City – the annual outdoor sculpture festival hosted by the City of London.

We were the structural engineer and installer of these beautiful waymarkers by the artist Jonathan H. Wright.

In addition to guiding walkers around Bishopstoke Park, Jonathan’s waymarkers tell the story of the site. We undertook the structural design of the waymarker posts and their foundations. We worked alongside the artist, and fabricator Ashley Light Engineering to deliver the project for Anchor and Eastleigh Council.

Constellation is another artwork by Jonathan H. Wright. It is the first artwork to stand on the Hove Plinth.

The artwork is based on an orrery (a mechanical model of the solar system). The sculpture sits on a slewing ring bearing enabling it to rotate freely.

We designed the structure to ensure that it was able to stand-up under the worst credible combination of wind loads, and the occasional live load from visitors to the seafront at Hove. Critically, for the artist, we kept the structural members as slender as possible to avoid compromising the visual appearance of the artwork.

We collaborated with artist, Gayle Chong Kwan, and fabricator, BIG SODA, on The People’s Forest installation at the Barbican Centre in late 2017.

Godber & Co. provided structural engineering design consultancy services to the artist; and worked with Sam and Rolo at BIG SODA, and the staff of the Barbican Centre to design and install the artwork.

We were the structural engineer and installer of Green Light for MR by Jyll Bradley.

Green Light was commissioned for the Folkestone Triennial 2014. The artwork is much-loved by residents and visitors to Folkestone and now forms part of the permanent collection in the town.

Godber & Co. collaborated on this artwork with framer and fabricator, Mark Darbyshire; with Goldings Agricultural Services; the students of the University of Kent; Reynolds Construction Ltd; and Martello Building Consultancy.

We worked with artist Robert Orchardson on this beautiful, artwork We are the sky.

Godber & Co. provided the structural engineering design, enabling Rob to achieve a beautifully elegant and build-able solution for supporting the artwork from a rooflight over a stairwell on campus at Loughborough University.

We provided engineering services to Install Archive in connection with the design of this de-mountable exhibition stand for the Panos Pictures Agency.

We were the structural engineer for the redevelopment and refurbishment of the Delfina Foundation‘s London HQ.

Godber & Co. worked in collaboration with Los Angeles-based engineers Nous; Studio Octopi architects; and City Interiors to provide Delfina with a new home from which to facilitate ongoing cultural exchange with artists from the Middle East and North Africa.

We have more than twenty years’ experience providing architectural, civil and structural engineering design services to public and private institutions, homeowners, and developers.

Whilst the focus of our business nowadays is on providing services to the art world we do, every now and then, get involved with more conventional construction projects.

*if we have used your photograph on our website and haven’t credited you correctly, do get in touch and let us know. We think your photo is great, and we want to make sure that we credit you properly.

One thought on “WHAT WE DO”